In the previous lesson, you learned some more letters in the Korean alphabet. You also saw some crazy tables that presented some Korean syllables that we made by matching up Korean consonants and vowels.

In this final lesson of Unit 0, you will learn the remaining vowels that you will need to be able to read Korean. Most of these letters are called “dipthongs” – which is just a fancy way of saying that there are two vowels in one. After learning these final letters, you will be able to apply these letters to words and start learning simple sentences and grammatical formations.

Luckily, all of the letters you will learn in this lesson are based off vowels that you have already studied. You should remember these letters from before:

There are four more vowels that we can make by adding one extra line to each of the previous vowels. By adding this extra line, a ‘Y’ sound gets added to each vowel:

If we were to make some syllables with these new vowels, they would look like this:
약 = yak
역 = yeok
육 = yuk
욕 = yok

Though these two vowels have different Romanizations, they sound identical to one another. They both sound like “eigh” in “weigh”

If we were to make syllables with these new letters, they would look like this:

Aside from “의,” you would rarely, if ever, hear those syllables in Korean. I showed them to my wife to record, and she couldn’t even wrap her head around how to pronounce the syllables “븨, 즤, 듸, 긔, 싀, 늬.” You can hear this in the recording, and also hear her laugh a little bit at the end. I discuss the pronunciation of ㅢ more deeply in the Pronunciation Lesson of this Unit.

In addition, there are three more of these types of vowels, but they are much less common than the any of the letters already taught. Of course, you should know these letters, but worry more about the other letters first:

ㅙ = wae (the most common of the three, it is most commonly seen in the word 왜 – meaning “why”). For example: 왜

ㅞ = we (probably the most uncommon letter in Korean. I know 8000 words in Korean, and this letter is only in 3 of the words that I know. Most commonly in the word 웨딩 – meaning “wedding”). For example: 웨

In this lesson, you learned 15 more vowels that you can use on top of the 6 other vowels and 19 consonants you learned previously. The following table will show you all of the Korean consonants and vowels, and how they can pair up to form syllables without the use of a third consonant.

Keep in mind that, as you move towards the right of this table (specifically the bottom right), the constructions become less and less common. Also keep in mind that (almost) every one of the examples shown below could also be matched up with a final consonant. Only a crazy man would want to see all of those possibilities.

Again, the whole point of showing you this table is just so you can be familiar with formation of syllables – and in no way do I recommend memorizing them.

In addition to everything you have learned in these first three lessons, it is also possible for a syllable to have four letters: one vowel and three consonants. This additional consonant gets added as the third consonant in a syllable. Using the same description and image that you learned in Lesson 1, these syllables essentially look like this:

If the vowel being used in these cases is horizontally aligned, (ㅡ, ㅜ,ㅗ, ㅠ, ㅛ),the syllable looks like the structure on the left. If the vowel being used is vertically aligned (ㅣ, ㅓ, ㅏ, ㅕ, ㅑ), the syllable looks like the structure on the right. In either case though, notice that the third consonant simply gets placed beside the second consonant. While technically possible to use more complicated vowels (ㅝ, ㅘ, ㅢ, etc…) I can’t think of any words that actually have syllables with a third consonant and a complicated vowel. The only reason I say “technically possible” is because the computer allows me to type these syllables. So, while technically possible, they are either not used or very rarely used. Most of the time, when a word has a fourth letter, the vowels are one of the following: ㅣ, ㅡ, ㅓ, ㅏ, ㅗ, ㅜ.

Five of the most common examples of this fourth letter in use for a beginner are:

Also note that this “fourth letter” does not refer to the complicated vowels (ㅘ, ㅝ, ㅐ, ㅚ, ㅞ, etc…). These letters should be thought of as one letter. Therefore, if you see the syllable: “관” – there are only three letters: ㄱ + ㅘ + ㄴ. The “fourth letter” refers to the addition of a third consonant.

Also, the “double” consonants you learned in the previous lesson (ㅆ, ㄲ, ㅃ, ㄸ) should also be thought of as one letter. Therefore, if you see the syllable: “있” – there are only three letters: ㅇ + ㅣ + ㅆ. A fourth letter will never be added on to a double consonant.

That’s it! You’re finished! Congratulations, you can now read Korean!

Why not try making some more syllables now that you know all of the letters in the Korean alphabet. The more you practice, the faster you will be able to recognize the letters later on.

In the meantime, because you don’t know any words, but you do know how to read, here is a small list of words in Korean that are actually English words. They are all words that have made their way into the Korean language because of the influence of English. Try to see if you can read each one:

Keep in mind, Korean sound structure is vastly different from English, so sometimes these Korean words sound weird compared to their English counterpart. Eventually you will come to terms with the Korean pronunciation, it just takes practice.

If you want to learn some tips on pronunciation, check out our Pronunciation Guide.
If you want to begin learning words and sentences, move ahead to Unit 1. Or,
Click here for a workbook to go along with this lesson. 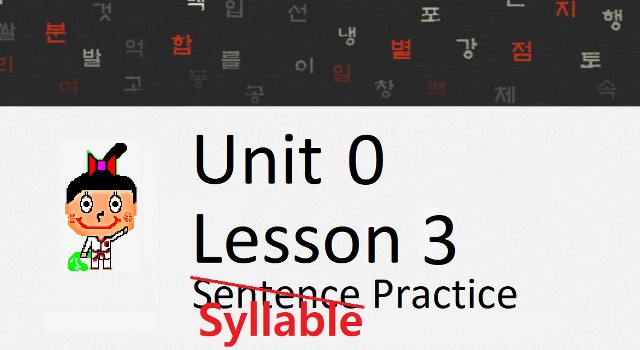 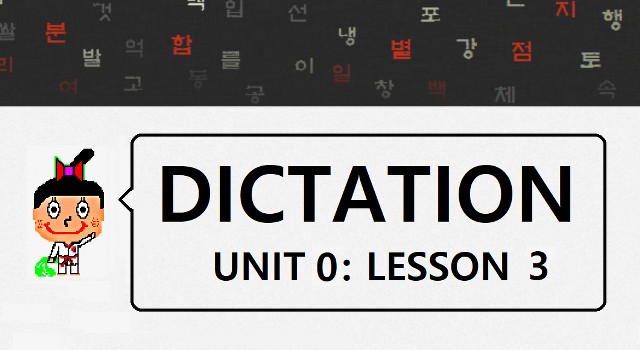 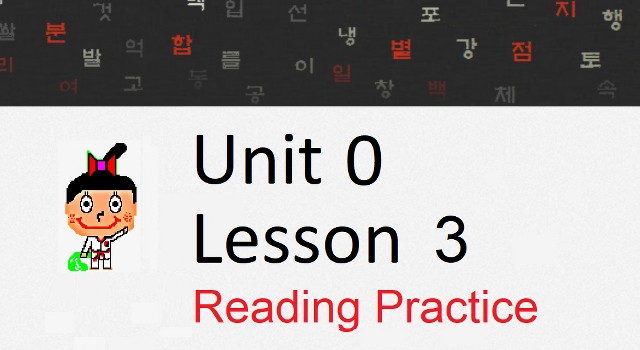