What do Korean People Eat?

Boasting some of the most delicious choices of food in the world, it is always good to learn common vocabulary and sentences related to food.

Below is a list of vocabulary you may find useful during a meal or in a restaurant setting.

Korean people use the word “menu” (메뉴) to refer to the food that can be served at a restaurant/other place. For example, at a school, you might hear students say “오늘 점심 메뉴가 뭐야?” Here, they are asking “What is the menu.” In English, we use “menu” to refer to the actual book that has different foods written on it. In Korean, this is referred to as “메뉴판.”

Various types of foods are talked about later in the lesson.

The word “맛” in Korean is “taste.” Therefore, by saying “맛있다” (or 맛이 있다) and “맛없다” (or 맛이 없다) you are literally saying that something has taste or does not have taste.

There are some words in Korean that we don’t have a good word for in English:

짜다 = “salty”
In English, I would only ever say this word if something literally has too much salt on it. In Korea, they use this word to refer to anything that has been over-spiced, which is, in effect putting too much salt in something. Therefore, while it might be rare to hear somebody say that something is “too salty” in English, you will hear it every day in Korean.

느끼하다 = “greasy”
Korean people use this word to describe the food, or the feeling after eating a type of food that is very doughy. The biggest culprit of this in Korea would probably be spaghetti, but other things like Pizza, bread, doughnuts or other things with lots of cheese/wheat will make Korean people feel “느끼해.” The best way to combat this feeling in Korea is to eat something pickled, which means that pickles often come as a side dish when you order pizza or pasta.

고소하다 = “nutty”
Korean people use this word to describe the feeling/taste when you eat something that tastes “nutty.” It is hard to explain this perfectly, but the most common time you will hear this word is when somebody eats sesame oil (참기름).

While the word for “breakfast” can be seen as “아침식사,” it is very common to refer to it simply as “아침.” Note that this word also means morning (hence, 아침식사 means “morning meal), but the context always makes it clear if you are referring to the morning, or breakfast. For example:

The same thing can be said for 점심 and 저녁.

For help memorizing these words, try using our Memrise tool.

Now let’s look at some specific sentences that you may find useful when in a restaurant setting:

이 게 맛있어요 = This is delicious

아직 배고파요? = Are you still hungry?

더 시킬까요? = Shall we order more?

편히 앉아 = Sit comfortably
In Korea, it is common to sit on the floor during a meal. It is polite to first kneel in an uncomfortable way, and then be told to sit down comfortably.

Deciding What to Eat/Before Eating

점심으로 뭐 먹고 싶어요? = What do you want to eat for lunch?

그 식당이 어디에 있는 지 알아요? = Do you know where that restaurant is?

식당은 은행 옆에 있어요 = The restaurant is next to the bank

맛있는 것을 사 줄게요 = I will buy you something delicious

제일 맛있는 게 뭐에요? = What is the most delicious thing?

어떤 종류 음식을 먹고 싶어요? = What type of food do you like the most?

식사 할 거에요? = Will you eat?
The word “식사” is also used when people have some sort of soup/stew at a restaurant. For example, you might walk into a Korean BBQ restaurant, and only want to get a soup/stew. At this point, you can say “식사만 할 거에요.” This would often translate to “I’m just going to have a meal,” but in this context, it indicates that you are going to have this specific type of meal.

Asking for Something While Eating

여기요! = Excuse me!
(If you want someone to come to help you with something at a restaurant)

소주 2병 주세요 = Please give me two bottles of soju

판을 바꿔 주세요 = Please change the pan
(This is common when eating Korean BBQ because the meat eventually burns the pan a little bit, so you need to change it for a new one)

잘 먹었습니다 = “I ate well”
If somebody buys/provides/cooks you with a meal, it is polite to say this after you are finished to show your thanks. It is also common in Korean to say this to people who you ate the meal with, even if they had no role in buying/providing/cooking the meal. For example, if you and all of your friends are at a restaurant, right before getting up to leave, they might all say this to each other. They would probably also say the same thing to the owner/cook/whoever when they leave the restaurant as well.

접시를 치워 주세요 = Please clear the plates (from the table)

2(이)차를 갈까요? = Shall we do round two?
(After a meal, it is very common for Korean people continue their outing with friends/coworkers by going to another restaurant or bar. They call this “Round two”)

Korean restaurants display the country of origin of their food products. If the product came from Korea, you will see “국내산.” For any other country, the country name is placed before “~산.” For example:

What do Korean People Eat?

Korean people traditionally eat rice with every meal. These days, with the continual influx of Westernized restaurants and eating habits, this doesn’t happen all of the time, but it is still the norm. The word rice (밥) is often used to refer to a meal in general, regardless of if the meal actually had rice in it or not. For example, if you just wanted to ask somebody if they ate, you could ask them:

Rice is the staple food at the table, and each meal will consist of various different types of 반찬. “반찬” typically translates to “side-dishes” in English, but they are not a typical side-dish in the way western people think. To me, a side dish is something you order (and pay more for) when you go to a restaurant – like an appetizer or something like that. In Korea, 반찬 are pre-made foods that are often able to be stored for a long time (due to fermentation). At home, Korean people store all of their 반찬 in dozens of Tupperware containers in the refrigerator.

The most common 반찬 of all (both in Korea and worldwide) is 김치. Korean people have so many Tupperware containers full of 김치 at their house, most people have a separate refrigerator (that looks like a deep freezer) that holds only 김치.

During a Korean meal, various반찬 are spread across a table – in what looks to be an enormous amount of food. 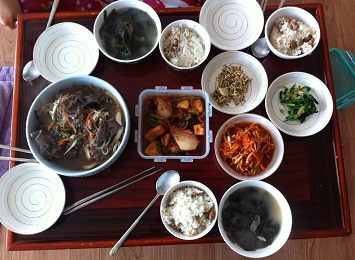 During the meal, Korean people will eat their bowl of rice and have a few pieces from their various 반찬 along with their rice. At home, at the end of a meal, these 반찬 go back into their Tupperware containers and put back into the refrigerator for the next meal. At a Korean restaurant, you will be given anywhere between 1 and 15 (or so) different 반찬 to graze over with your meal. You can typically order more of any 반찬 you want as long as you keep eating it. Whatever you don’t finish at a restaurant will be thrown away.

Here are some examples of some common 반찬 you will find in Korea. The translations of these are meaningless in English mostly because we would never eat something like this in a Western Culture. Pay more attention to the Korean word and how it looks instead of trying to understand what the thing might be based on the English word:

(배추)김치 = (cabbage) kimchi
There are many types of kimchi, but the one that most people are referring to when they just say “kimchi” is the one made from Korean cabbage (배추). Although it can be called “배추김치,” saying “김치” usually is sufficient.

Listing out all the 반찬 and explaining what each one is would take forever. There are hundreds of different types, and they all can’t really be explained in English.

In addition to the rice and 반찬, there are various soups (국) and meats (고기) that Korean people enjoy.

Really, they are all very similar and it’s best to just know each individual food by its respective name and not worry about the difference between these three.

Below are some of the more common and popular soups, stews, or whatever you want to call them:

부대찌개 = Army soup
(During the Korean war, the US military used to give extra food to Korean people on the street. This usually consisted of things like hot-dogs and stuff like that, so Korean people at the time took all the ingredients and made a stew out of it)

Korean meat is often fried in-front of you, and you typically do it yourself. This style of food is usually translated to “Korean BBQ” in English. Having a room full of people Barbequing their own meat in an enclosed restaurant usually results in a lot of smoke, and meat-smelling clothes by the end of the night.

Below are some of the more common and popular meats you will find Korean people eating: 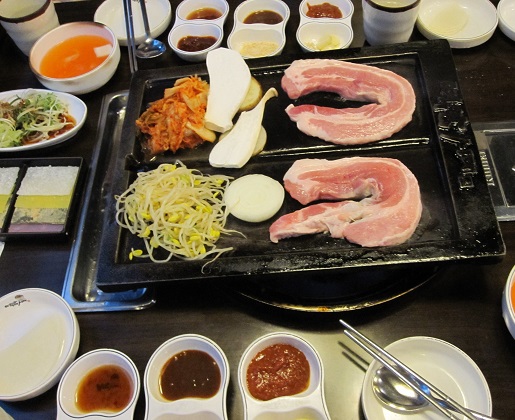 In addition to those, below are some other common foods you will find in Korea:

Mmm… so much delicious food.

That’s it for this lesson. Click here to check out our next Theme Lesson.

Have something you want to include? Want to know how to say a sentence in Korean? Post in the thread designated to this specific lesson in our Forum, and we will add it to this lesson.