In this lesson, you will learn five Hanja characters relating to school.

Although fairly complicated, this is one of the characters all Korean people are expected to know. As such, it is not uncommon to find the 漢字 version of this character used in place of the 한글 version.
A lot of the words where this character can be found are very common. 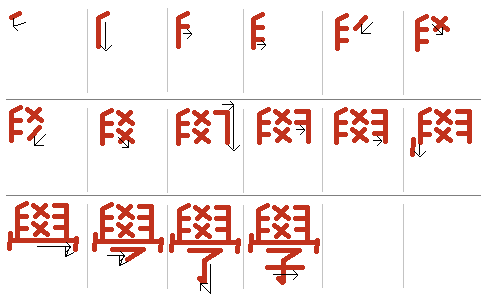 I included this character in this lesson because of its use in the word 學生. However, this character can be found all over Korea, and is another example of a character that Koreans are expected to know. It is often used to indicate freshness at restaurants, or is used in words to have the meaning of “life” (or something related).

This character is common and I highly suggest you memorize it but not all Korean people would be able to recognize/reproduce this character. It has a similar meaning, and is often found in words with 學. However, this character more relates to the school than the learner.

The main meaning of this character is to indicate that one thing precedes another (as in, to come “first”). It can also be found in the word “선생님.” Aside from “선생님,” most of the other words that it can be found in are comprised of difficult 漢字 characters.

Most commonly found after another 漢字 character indicating the name of a profession. The professions that “師” usually describe are those that commonly require a lot of studying. Amazingly, the word “교사” is not 校師, but rather “敎師” – which contains another (more complicated) “교” that you have yet to learn.